Now For Something Exotic

For a change of pace, I thought I’d post something unrelated to the land.  In addition to looking for land, I’ve been compiling ideas for the house for months (years).  After looking online for so long, we’ve finally went out and started looking at stuff in person over the past couple weeks.  I also ordered some flooring samples which we received today.

Because of our dogs, we have pretty tough requirements for flooring.  We put Pergo laminate floors in our previous house which was fine for that house, but not something we’d want in the new house.  Our current house has Red Oak floors which is pretty standard for newer houses around here.  Personally, I can’t stand anything oak, but we didn’t have much of a choice.  (I will say that I’ll take oak over carpet any day).  As expected, the dogs have done a number on the floors in 4 years.  We have a 180 lb Mastiff and 100 lb Lab, so anytime they get up or try to stop moving, they scratch the floor.  Fortunately, the finish has held up so the scratches are just indentations, not scratches into the bare wood.

Ideally I’d like to have hard floors throughout the whole house.  We all have allergies and carpet doesn’t help matters.  Despite any disadvantages with hard floors, at least when you clean them, you know they are clean.  We will end up with a mix of tile and hardwood.  For initial cost reasons, we may put carpet in the upstairs with the intention of replacing it with wood in a few years.  Any hardwood needs to be significantly harder than our current Red Oak.

Based on a lot of research, I ordered 7 samples from BR-111.  BR-111 is a flooring manufacturer that has an excellent selection of exotic woods.  Exotic woods tend to be the hardest which is why they are at the top of my list.  I’m not sure that any of these are the exact flooring we will use, but it’s a good starting point.  I ordered 7 samples, but only received 6.  The missing sample is a Bamboo so the smallest sample in the pictures below is a Bamboo that we picked up at Home Depot instead.  I took several pictures of them in different lights to try to show the color and grain. 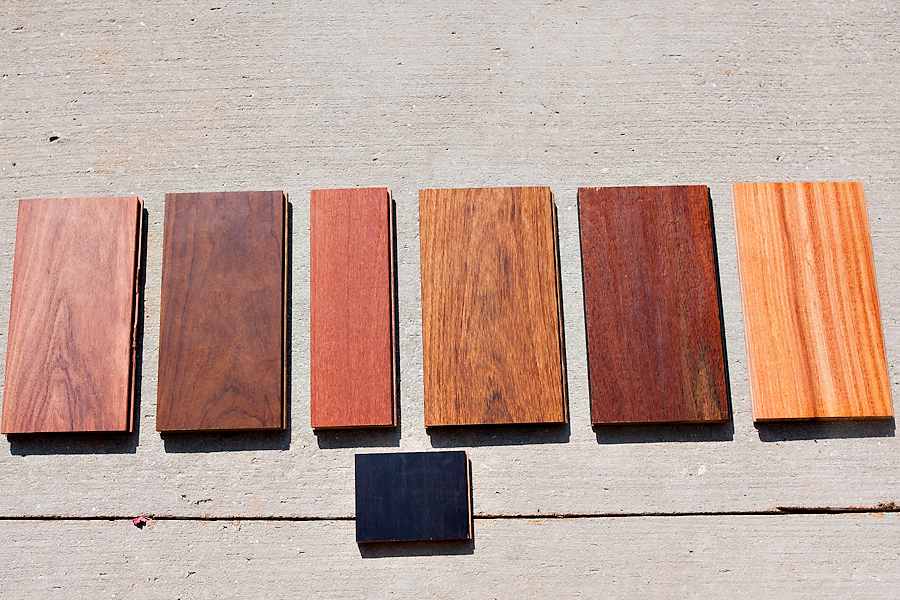 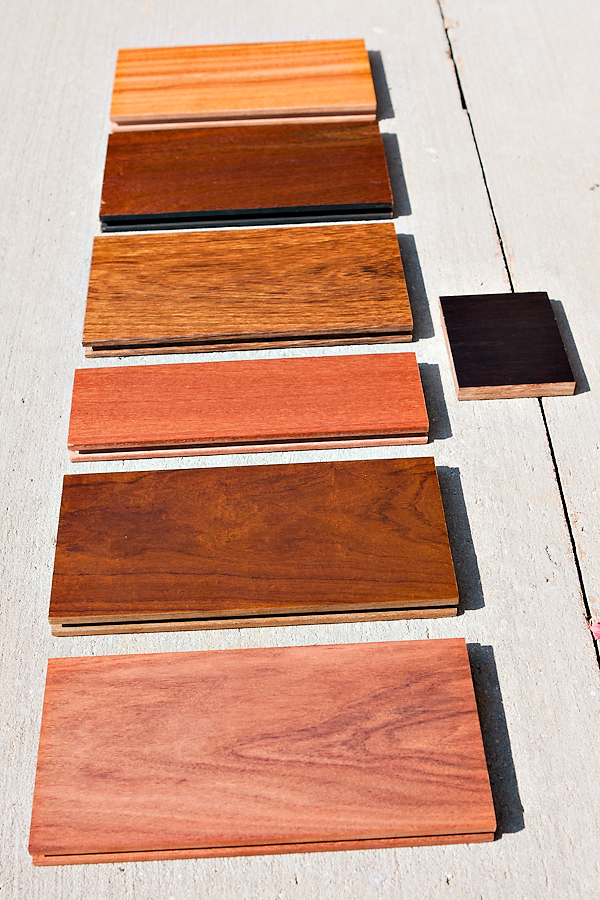 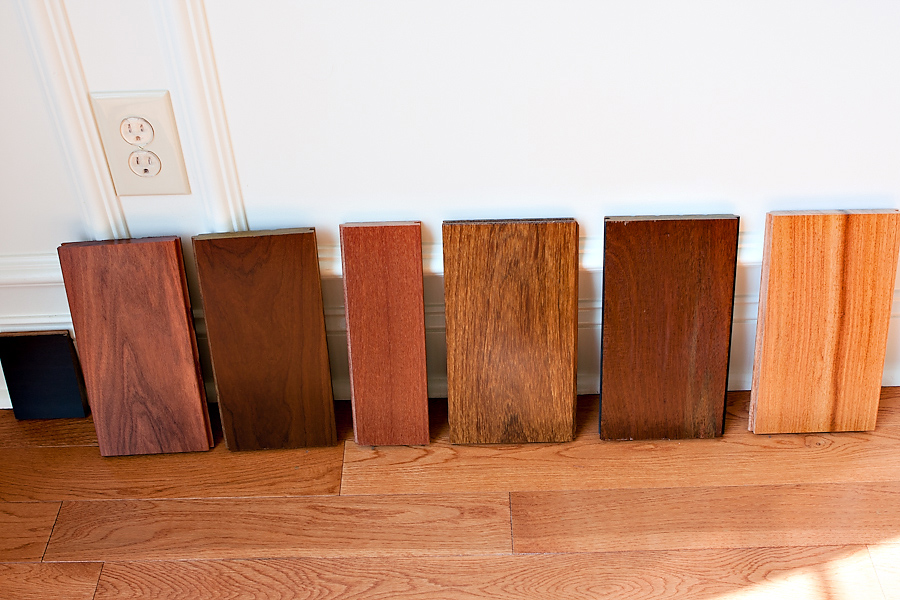 Here are close-ups and details about each one.  First is the Espresso Bamboo.  There are 2 types of Bamboo flooring – regular and woven/strand.  Woven or strand Bamboo is significantly harder than regular because it is bamboo fibers that are compressed and glued together.  The piece below is woven which you can see in the edge shot.  We really like the grain of bamboo, but I’m not sure if it’s quite as hard as we need.  I love the finish on the sample below, but I’m afraid it would always look dirty because it is so dark and uniform.  I’m interested in comparing it to the other sample I haven’t received yet. 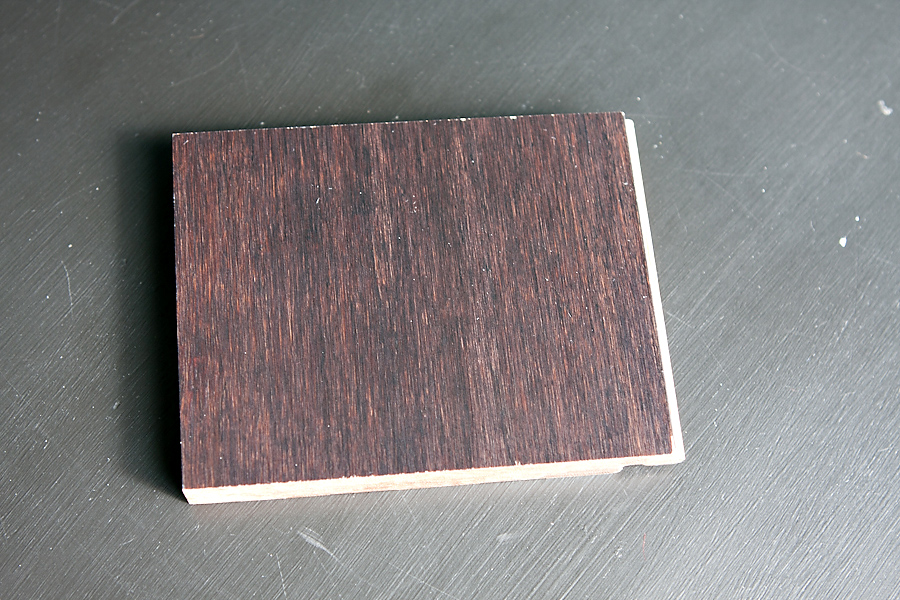 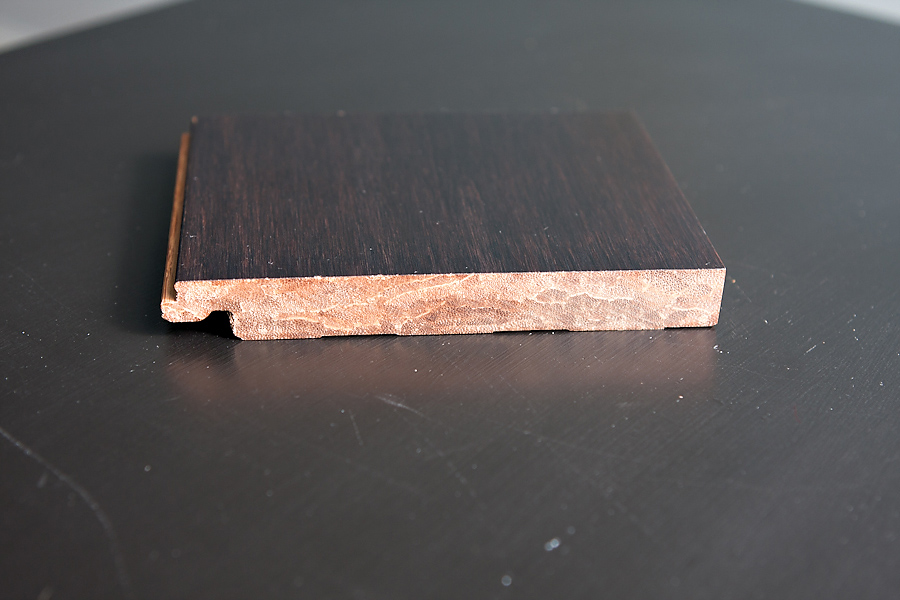 This sample is Angico (Vermelho).  On the Janka Hardness Test chart, Angico is the hardest wood.  Unfortunately, I realized after I got it that this is not the same Angico.  This Angico is closer to Brazilian Cherry.  That explains why it is redder than I was imagining.  This is quite a bit softer than the Angico I was wanting, but it’s still quite a bit harder than Red Oak.  This is probably our favorite of the samples though.  The grain and color is beautiful and the finish is like silk.  I’m not crazy about something this pink/red, but I think it would darken to a more brownish shade.  I’d like to see the other Angico to see how it compares. 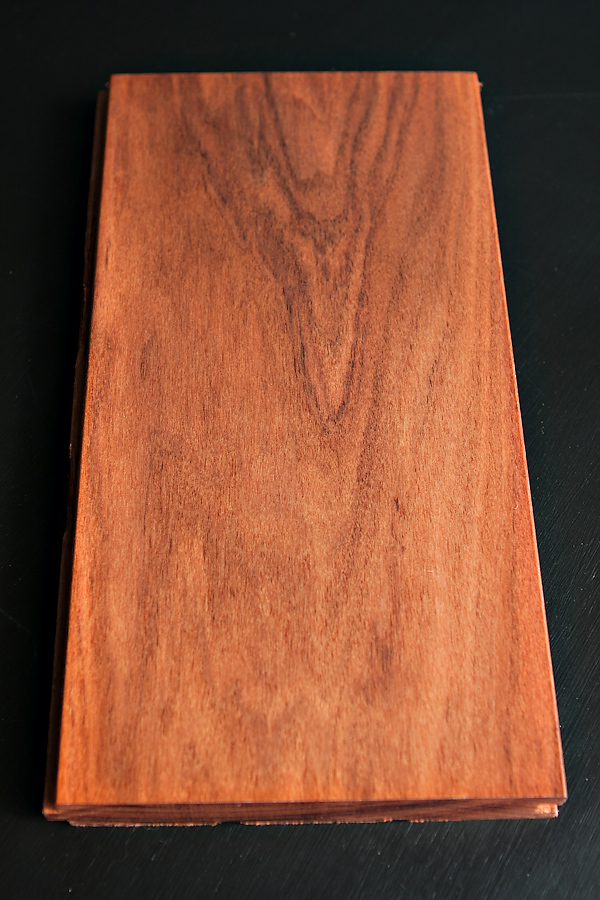 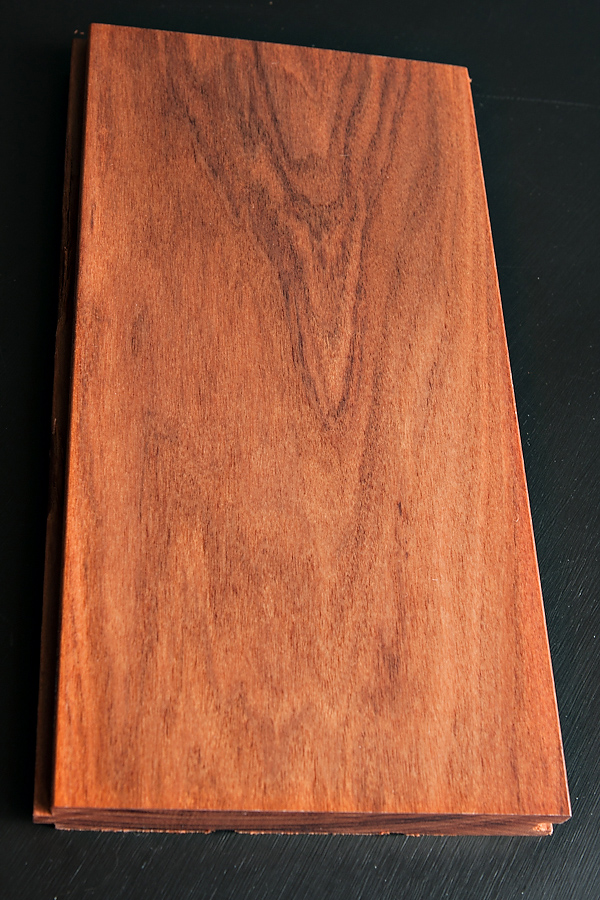 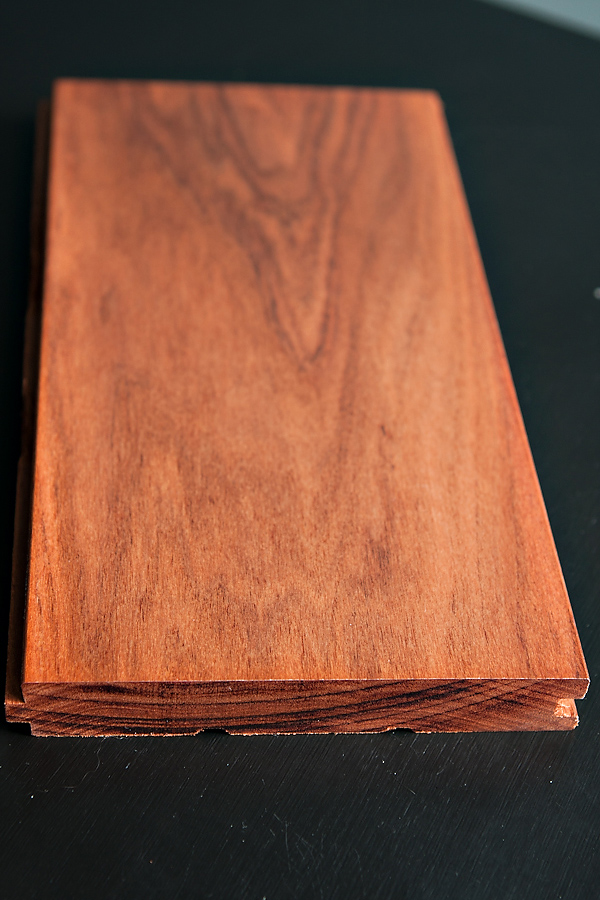 This is Brazilian Walnut, otherwise known as Ipe or Lapacho.  Brazilian Walnut is the second hardest wood on my list and has been my first choice for a while.  I love the grain and deep brown color of Walnut.  Brazilian Walnut is not actually a true walnut, but has similar characteristics including the green cast you can see on the cut edge (it’s more obvious in person).  Brazilian Walnut is often used for decking.  Because it is so dense, it is water, pest and fire resistant.  You can soak it in water and it will still weigh the same 24 hours later because it won’t absorb any water.  It is also very hard to burn.  Because it is so hard, it is also harder to install.  You have to pre drill the nail holes to prevent from breaking nails or splitting the wood.  Installation will take longer and be more costly.  I think the dogs (and us) will be hard pressed to destroy this very quickly (if at all), so the advantages will outweigh the disadvantages.  The pictures below make it look a bit lighter and gold/red than it really is.  The group pictures above show the color more accurately. 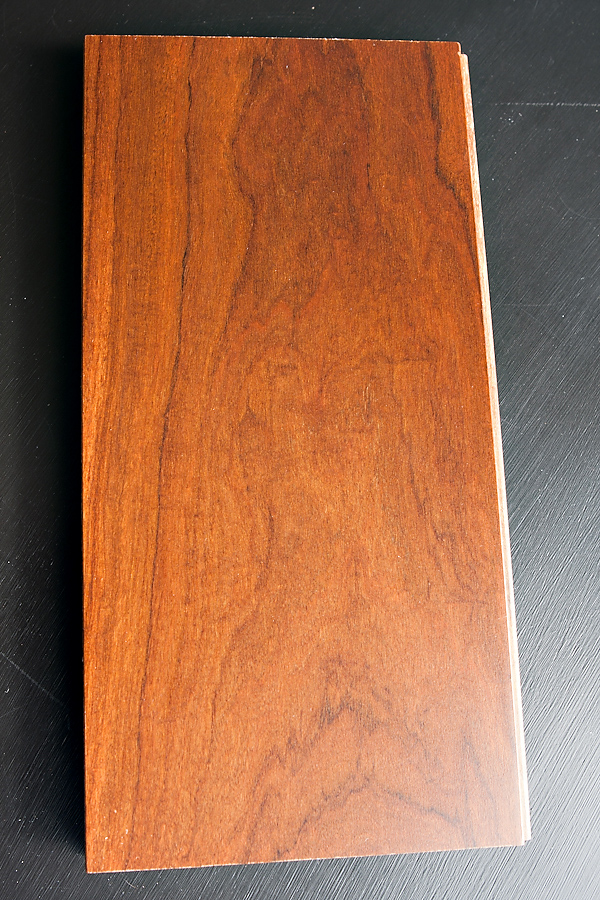 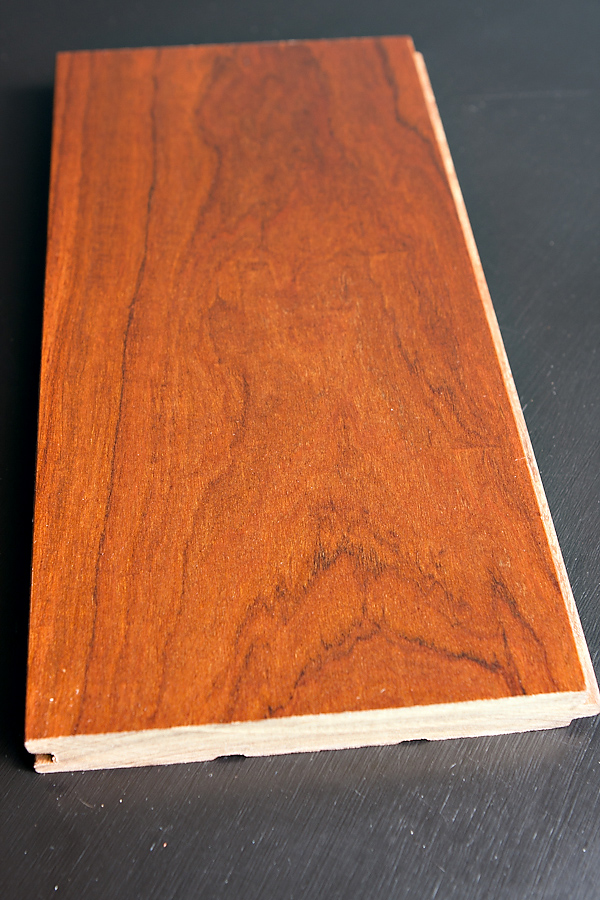 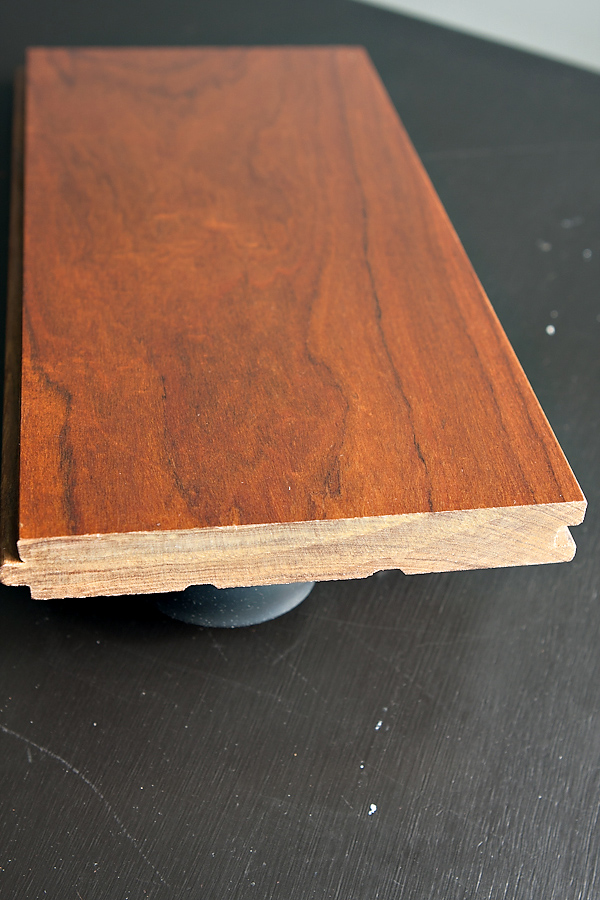 The sample below is Brazilian Teak (Cumaru).  It is almost as hard as Brazilian Walnut and is also used for decking.  It has been next on my list after Brazilian Walnut.  Unfortunately, I don’t think this sample is a good example of the wood.  Brazilian Teak tends to have a lot of variation and also has a beautiful grain (we have seen this in stores).  This sample is pretty red and doesn’t have the nice grain.  I would expect to have pieces like this in the box, it’s just not the sample I would have wanted. 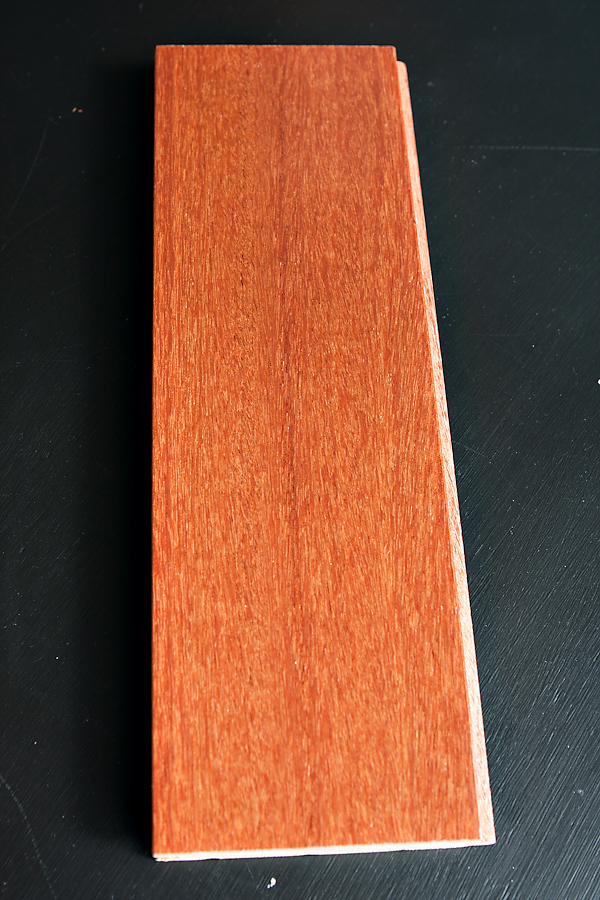 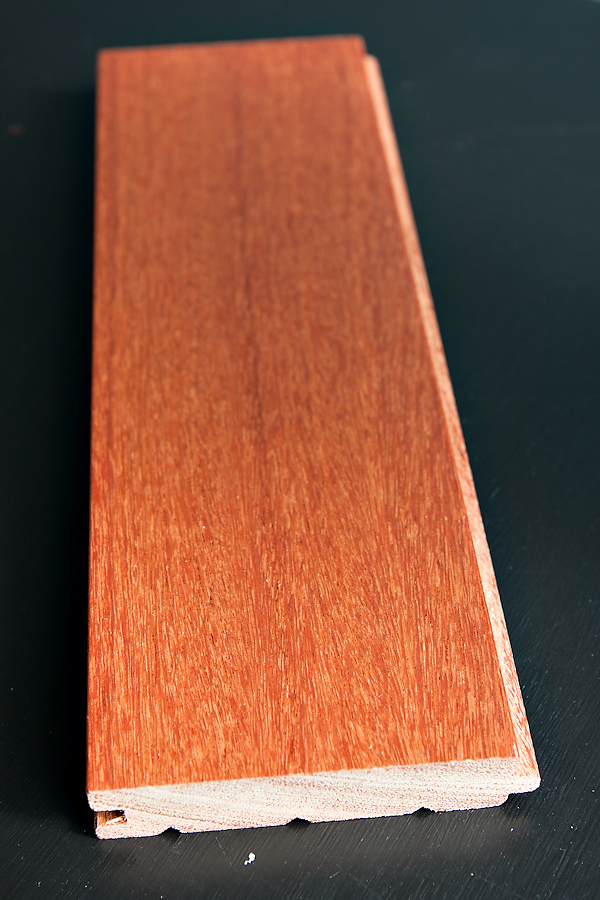 This is a new wood I just came across while looking for samples to order.  It’s called Tiete Chestnut (Sucupira).  It is golden brown with a very interesting grain (check out the cut end below).  It is also very hard, similar to the Brazilian Teak.  I’d still like to see a larger sample with several boards, but I think I’d rather have something with a “smoother” grain like the Walnut or Angico. 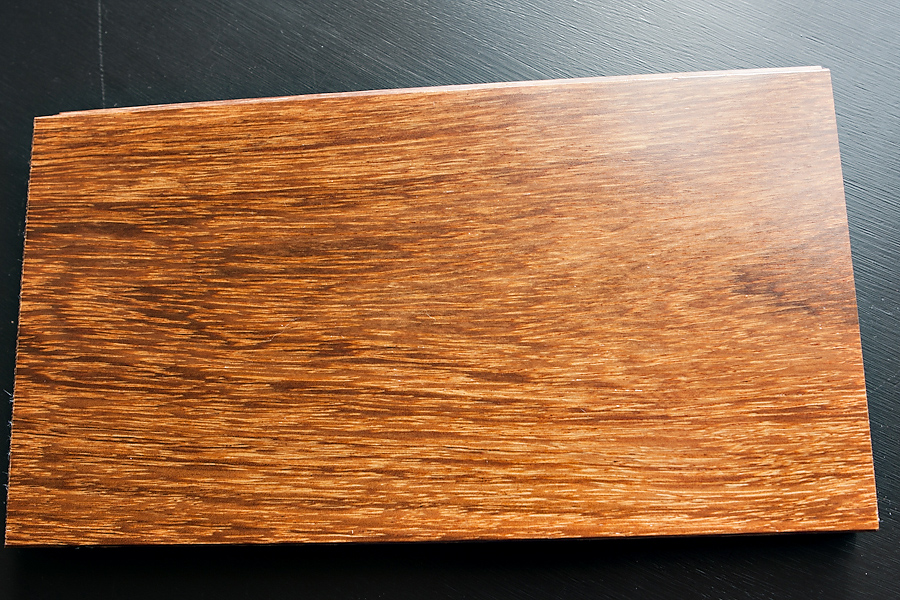 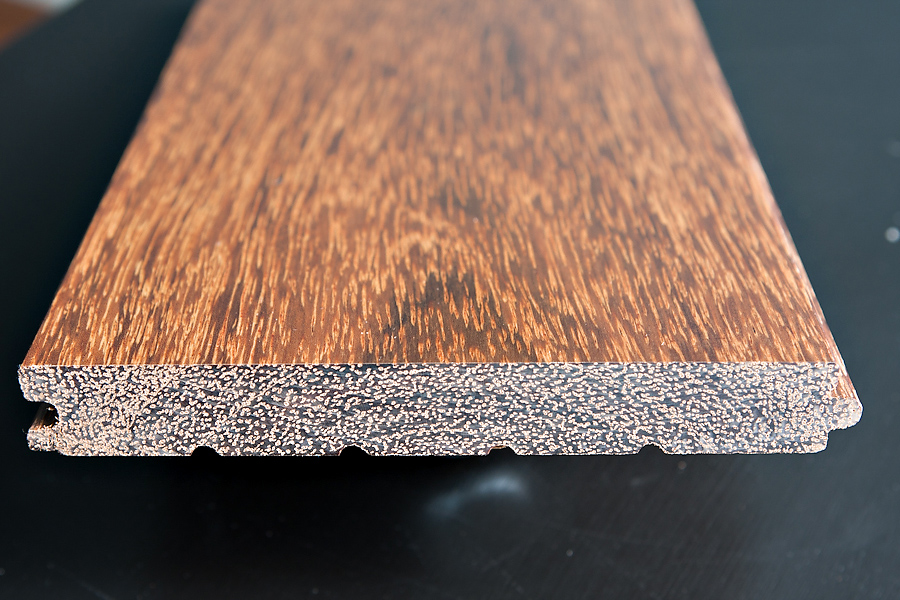 This sample is also a type of Brazilian Walnut called Melbec Walnut (Lapacho).  It has the same characteristics as the other Brazilian Walnut, but a slightly different color and grain.  This sample is hand scraped which gives it the texture you can see in the top picture.  The finish on this one is very rough.  I’m not sure if it’s just this piece or if it’s a result of the hand scraping on such a hard wood.  I think I prefer the other Brazilian Walnut over this one, but the hand scraped finish is something we may consider since it would help mask any damage we might do to it. 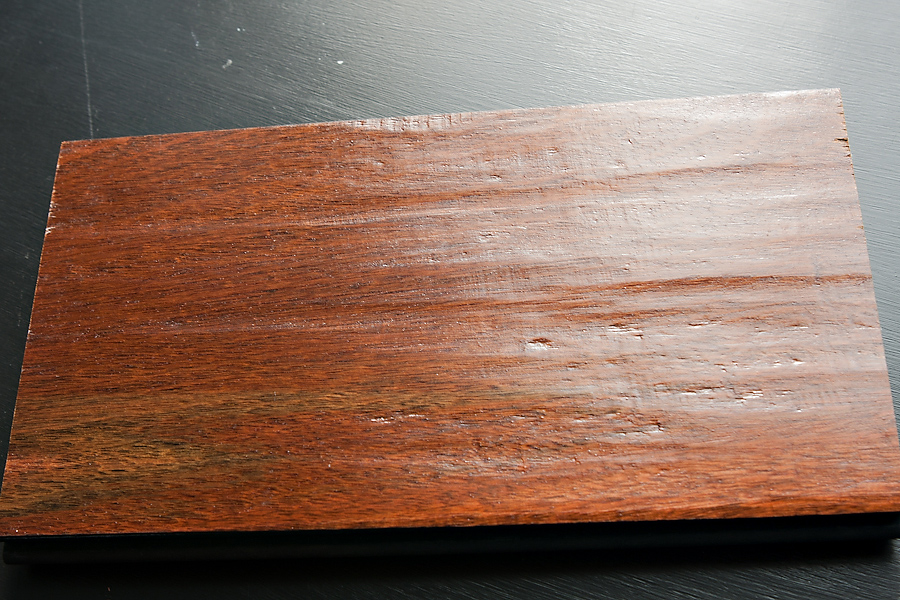 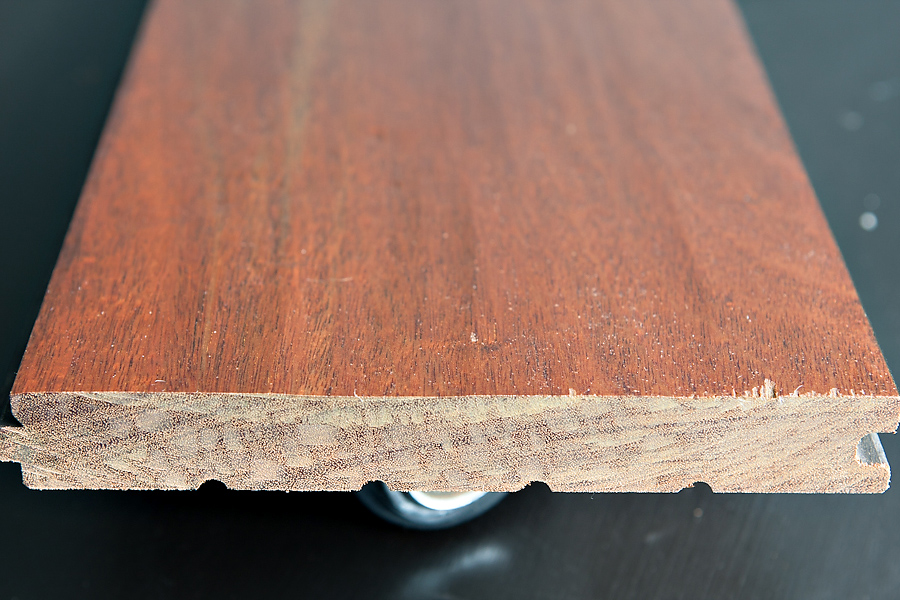 The last sample is Afzelia.  I’m not sure why I ordered this one as it is almost half as hard as the others and not much harder than Red Oak.  That alone rules it out.  It has a pretty grain otherwise and the color isn’t bad for something lighter. 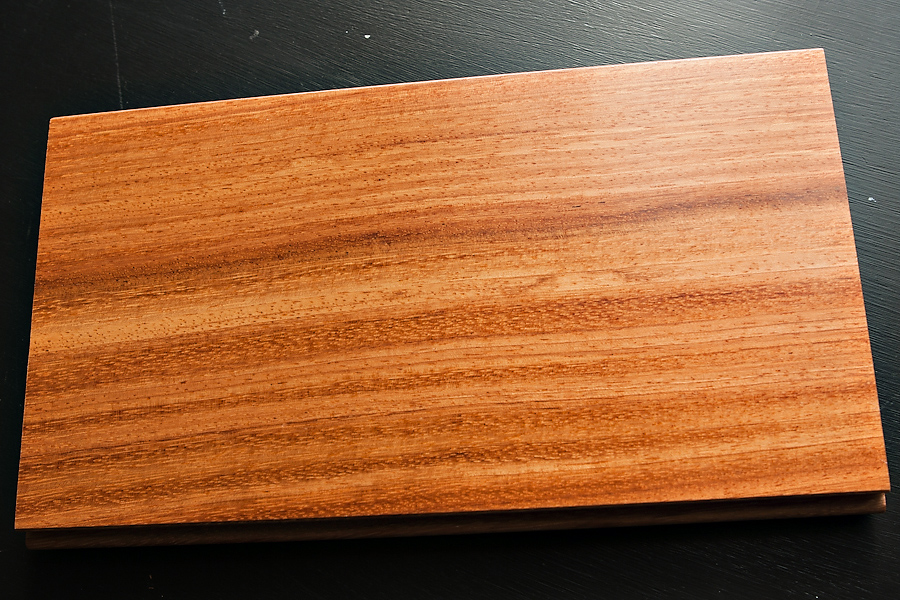 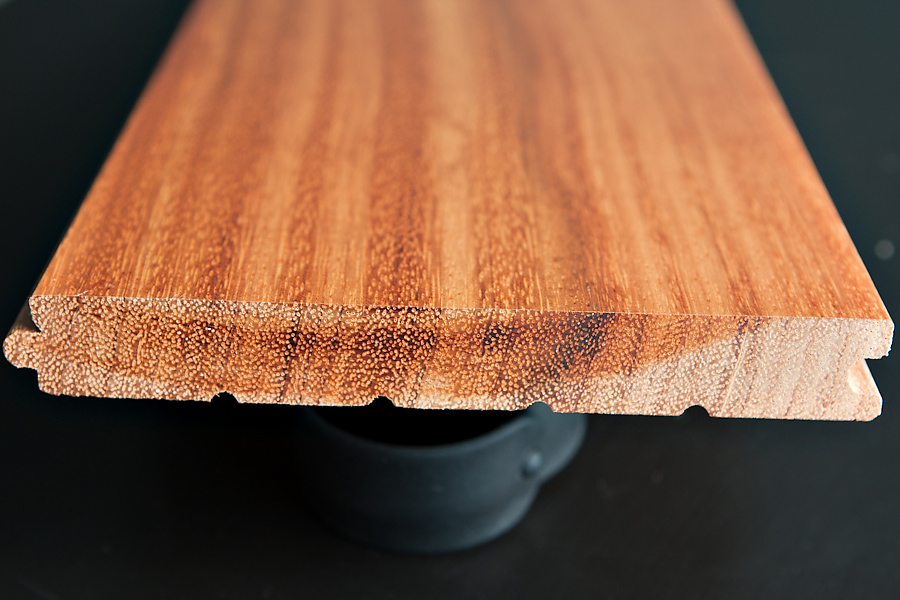 We will have a lot of other decisions before we have to decide on flooring, but it’s nice to see these in person and I’ll have them for reference in the future.  Meanwhile, I’m working on a link where you’ll be able to see the pictures I’ve saved for inspiration and items we are considering for the house.  I’ll hopefully have that up in the next week or so.

*As always, click on any picture above to view it larger.*