It took over a month, but we finally had our meeting with the draftsman yesterday.  I had marked up all the plans and elevations on Friday, so we spent about 45 minutes yesterday going over my notes.  Most of the remaining changes are minor- outlets, window and door sizes, etc.  The biggest issue that remained was the staircase.  I wanted 3 windows across the middle section of the front of the house, but the staircase was too low for one of the windows. 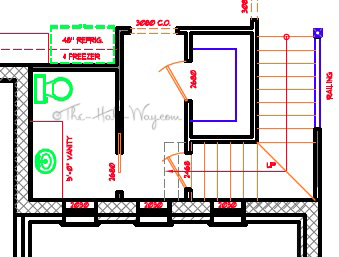 It’s right in the center of the front elevation, so leaving one of the windows out was not an option.  We had thrown around options and the only good one so far had been to pull the staircase away from the exterior wall by 1 foot.  That would trade a foot of pantry space for a foot of wasted space, but would allow us to keep the exterior looking the way I envisioned.  We weren’t thrilled with that idea though.  Yesterday, we suggested adding one more step at the bottom of the stairs (there is room, you can see in the drawing above), then moving that exterior wall out 1 foot.  That makes the first flight of stairs longer and makes the second flight high enough to go over the window.  It should also keep the staircase from encroaching into the ceiling of the hallway.  It adds some square footage to the house, but I think it is our best option for the interior and exterior.

When we got home, I went into my program and messed around with the windows to try to get the look I wanted.  Below is what I came up with (ignore the crazy roof lines and off-centered upper window – just look at the 3 windows on the bottom).  We got an email yesterday afternoon from the draftsman saying that our idea worked and he is able to make the windows look how they are pictured below.  I’m very glad to have that taken care of. 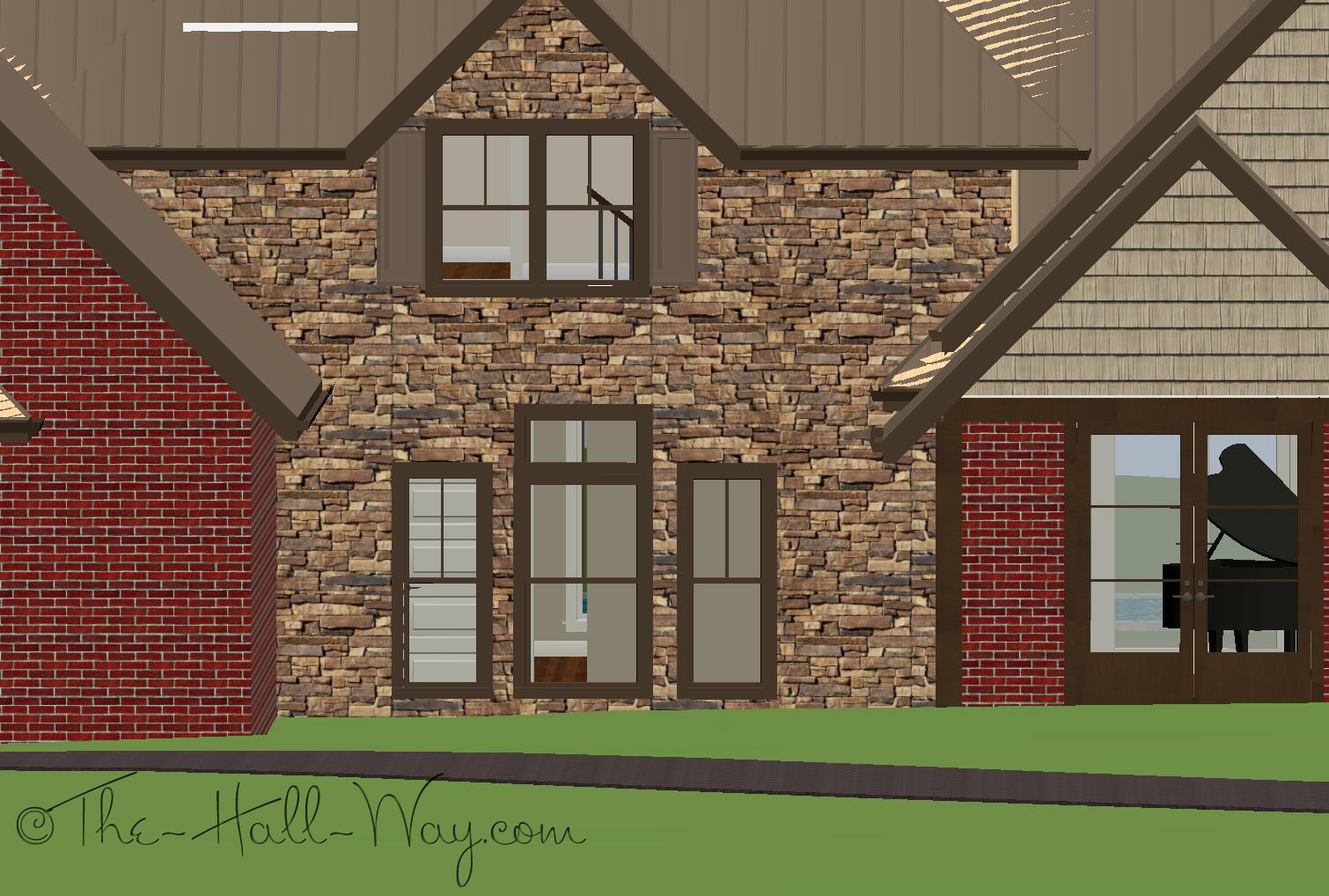 Meanwhile, he has one of his assistants working on the rest of our changes and will have the lumber company start on the framing plan next week.  We should have the final plans finished in the next week or 2 (although it has taken us almost 5 months to get to this point, so we’ll see).  He should be able to give the builder enough of the plans to start working on our final estimate next week.  We knew there’d be delays in the building process, but we didn’t think it would be before we ever signed the building contract or applied for the loan ;P

I’ve also been looking at options for our wood floors.  Here is the sample I have of the Maduro Bamboo from BR-111.  It’s showing up a little redder on my screen than it is in person. 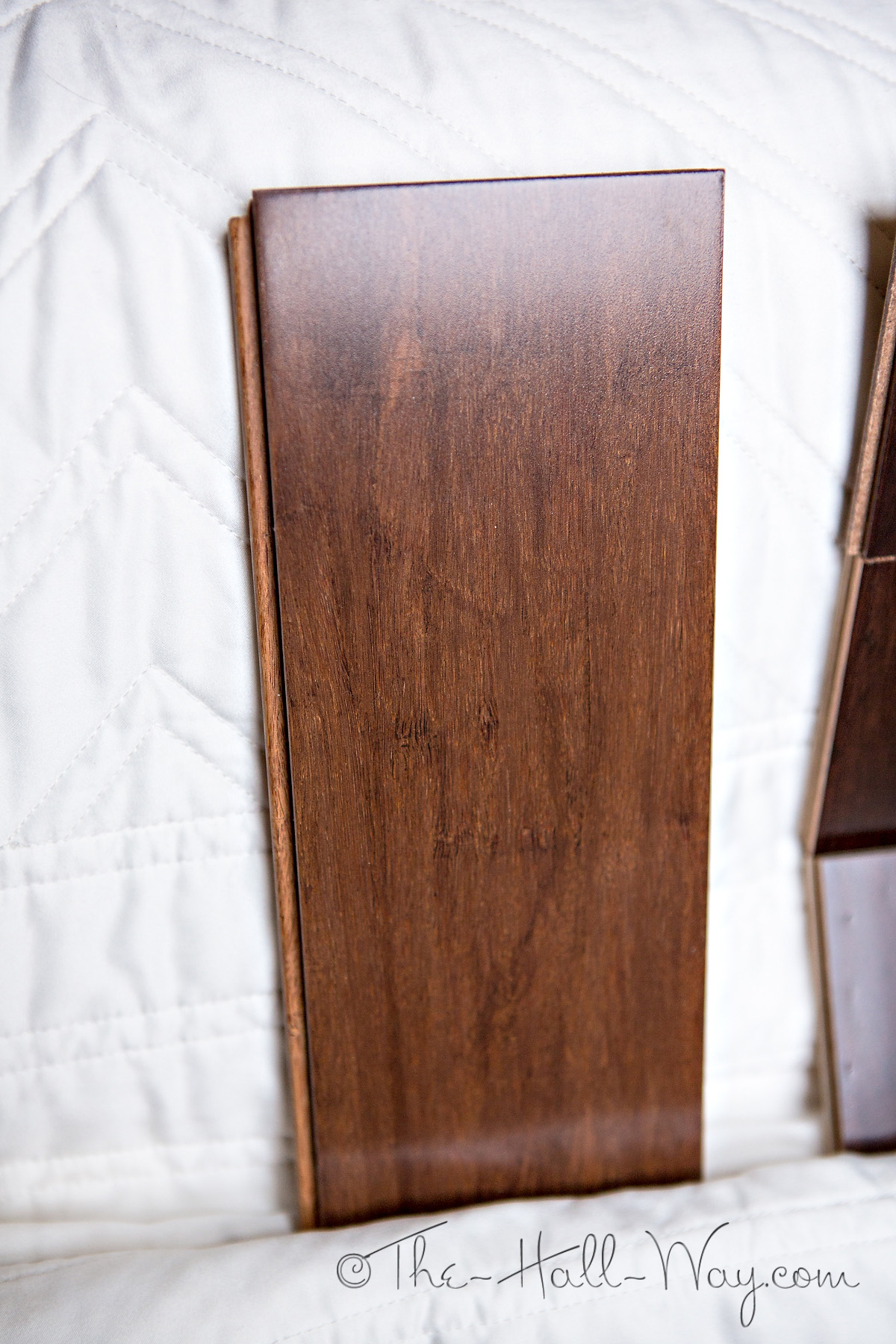 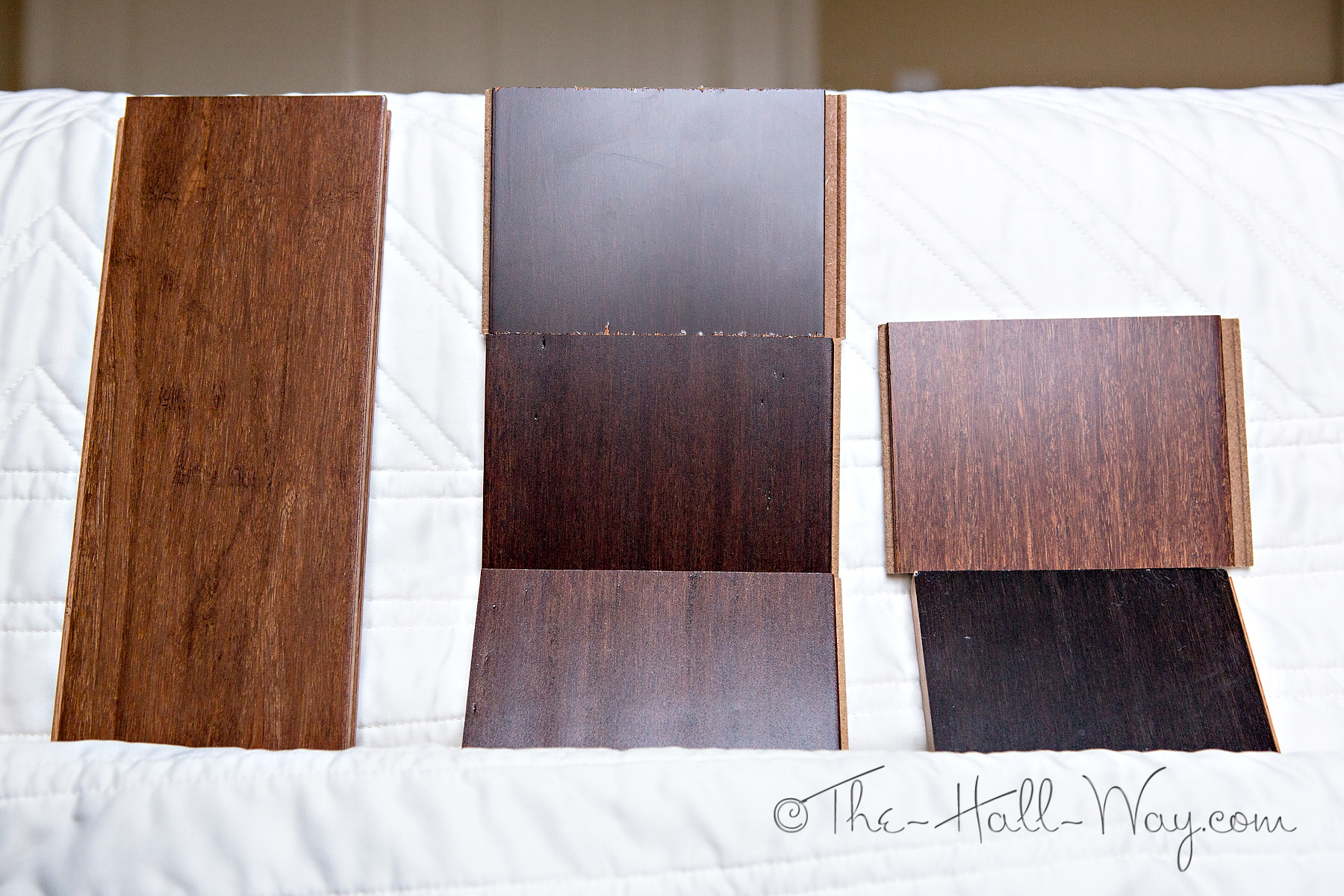 I think the Maduro on the left is still my favorite.  The walnut bamboo is a little too dark, the Sapelli is too red/pink and the espresso is way too dark and uniform.

I also came across a Platinum Maple flooring sample which is a similar stain to what I am thinking about using on the kitchen island.  The picture below shows it next to my top choice for the island countertop (Cambria Praa Sands).  On the right is a sample of Antique Brown granite with Benjamin Moore white paint chips above it – my current selections for the kitchen perimeter cabinets. 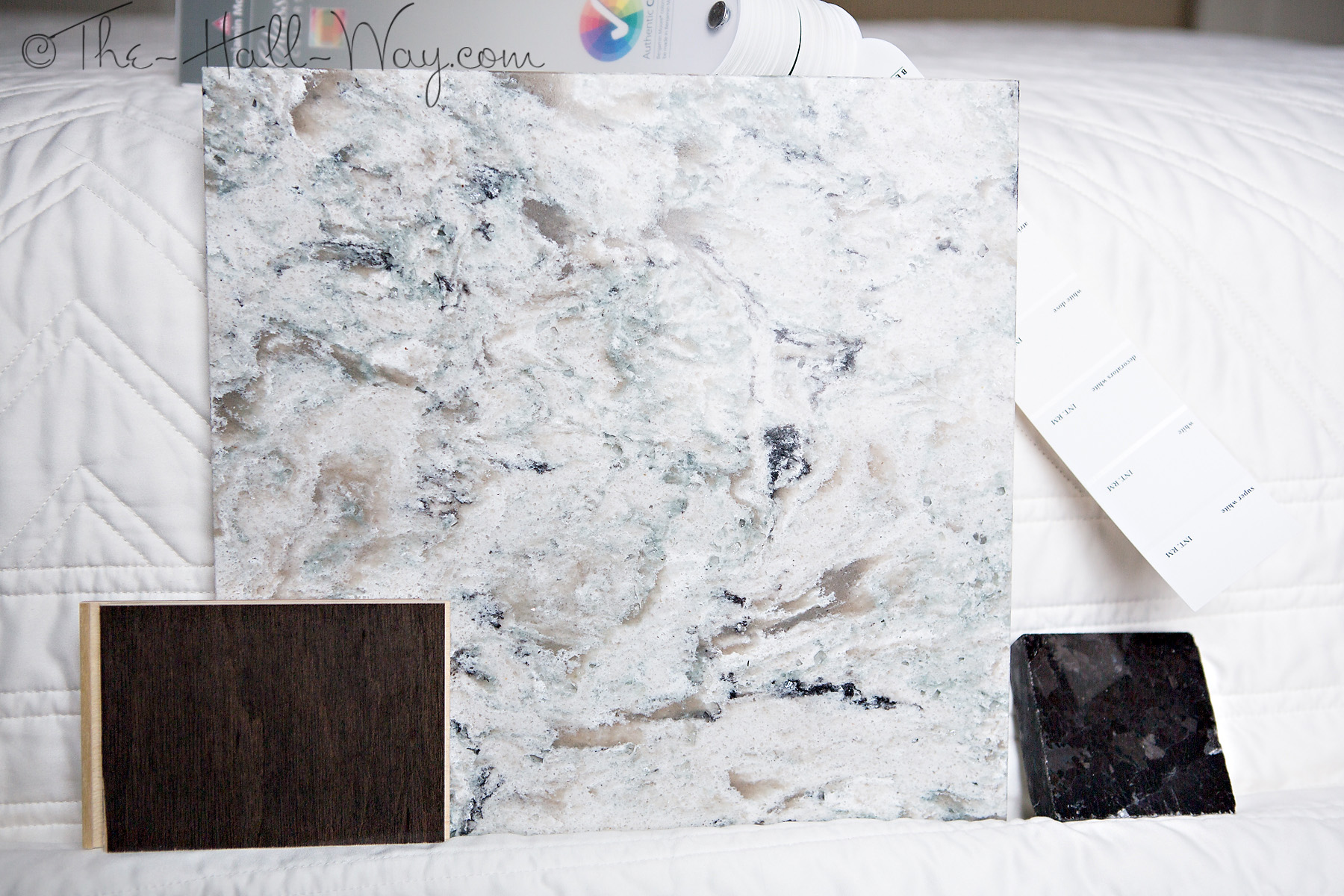 Here’s another picture with the Maduro Bamboo sample included.  This picture is a little too light – the one above is more accurate. 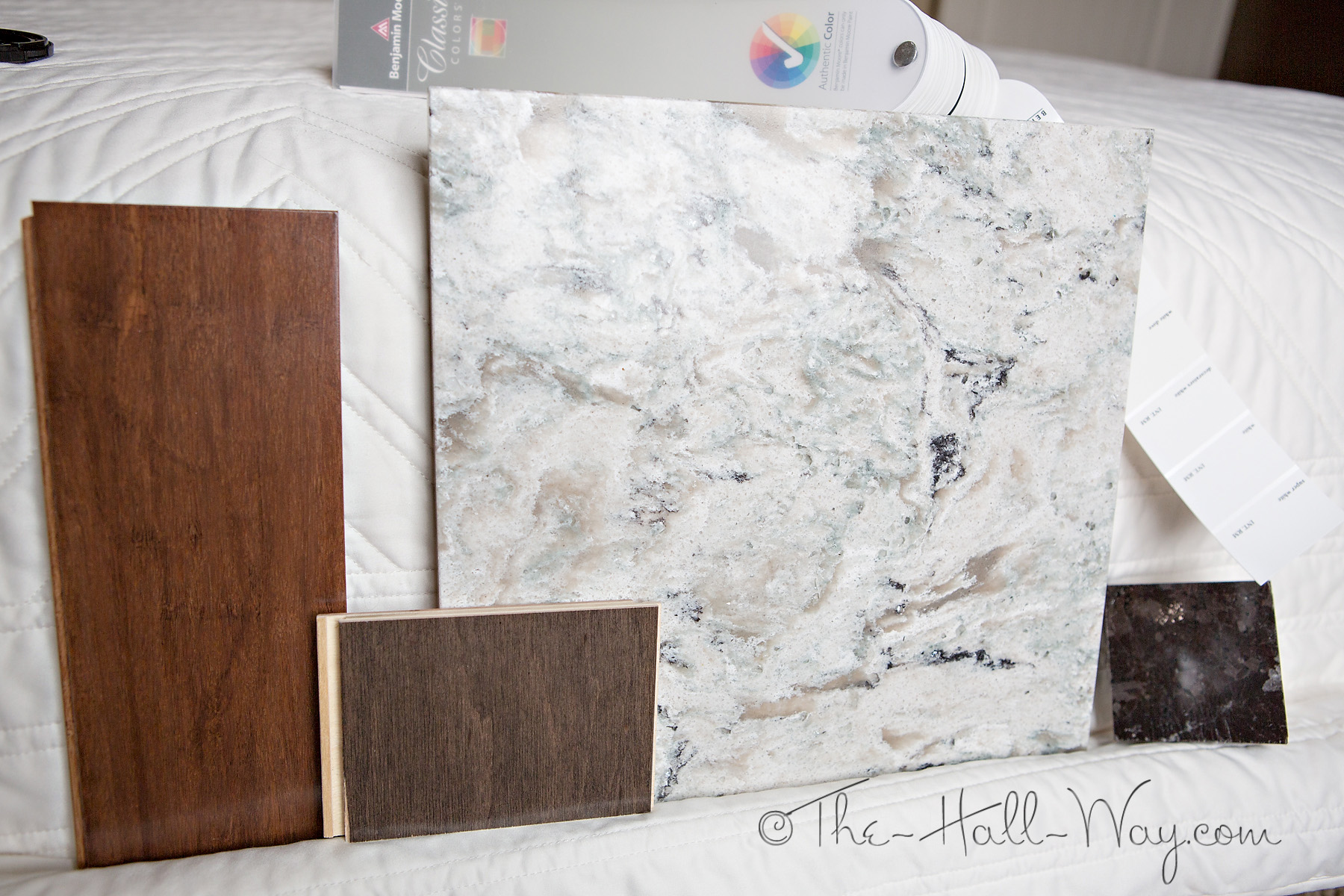