Our closing is scheduled for this week and we are very ready.  Last week, we had to given written explanations to the bank of why our credit has been ran so many times in the past 6 months.  The last construction loan bank ran our credit 6 times in one day!  We are both done with the whole loan process.  I told David that it feels like it’s taken a year and a half to get to this closing.  His reply – “It has.”

Among other things, window treatments have been one of my main focuses for the past couple weeks.  Ideally, I wouldn’t put anything on the windows, but I can’t sleep with the sun shining in and am not crazy about strangers being able to see in ;p  The new house has curtains everywhere, except the master bath and bonus room, which have roller shades.  Personally, I hate curtains.  Like carpet, they just tend to collect dust and dirt – especially with 2 dogs in the house.  Our rental has faux wood horizontal blinds which also collect dirt and block the view.  They make the house feel closed in since you are always looking thru the slats, but they don’t block the light out very well in the morning.  Raising them up leaves a foot of blind stacked at the top of the window.  The one on the back door bangs multiple times a day when we let the dogs in and out.

In our last house, I put woven wood roman shades almost everywhere.  They looked really nice and depending on the room, I ordered them with either no liner or a privacy or blackout liner.  They did get dusty, but were fairly easy to vacuum.

In 2 of the bedrooms and the garage, I put roller shades which I really like.  When they are up, they don’t block the window at all and you almost don’t notice them.  The ones in the bedrooms had a natural texture on the front, similar to the woven wood blinds in the other rooms, so they weren’t plain vinyl.  My plan was to do something similar in the build house.

(Disclaimer: I did have curtains in our old dining room.  I hadn’t planned to put anything in there, but the afternoon sun was unbearable.  The window was huge with an arched top, so buying something would have cost a fortune.  I ended up making 13′ long curtains for around $300.)

My dilemma with the new house is that the window sills are really shallow.  The windows are vinyl, but they are 3.5″ thick.  That leaves almost no wood to mount window treatments to.  I’m not crazy about outside mount shades because they detract from the window and it won’t look right with all the heavy trim around the windows.  That leaves a little over an inch at the top and less than half an inch on the sides to hang mount something. 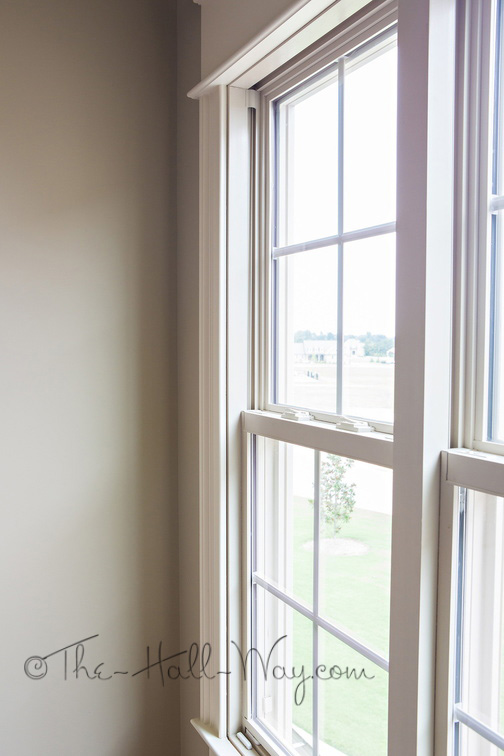 Even the roller shades in bonus room stick out from the window.  Any other type of treatment (except maybe cellular shades) would stick out even more.  I still think roller shades are the way to go for most of the house. 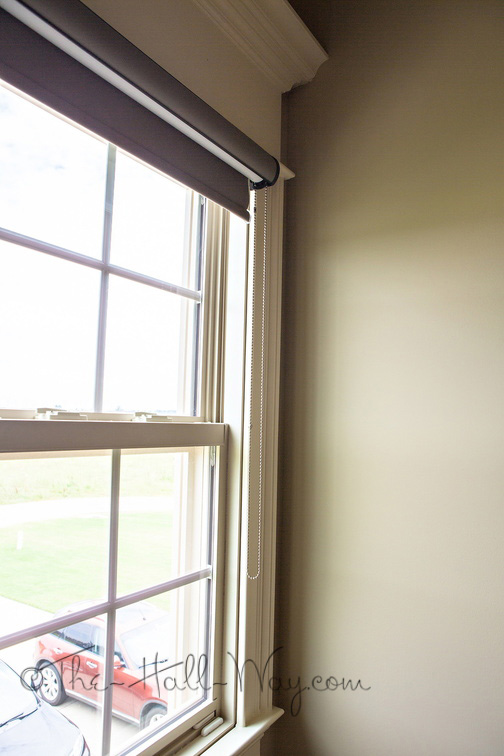 Once again, I’ve acquired a large stack of samples and I think I have them pretty much narrowed down.  We actually don’t need shades for most of the windows.  The formal dining room and living room are under porches so the sun shouldn’t be an issue.  I’ll decide later whether to put something on the dining room windows for privacy since it’s on the front porch.  The window over the kitchen sink faces north and shouldn’t need anything.  The breakfast nook window should only get brief morning sun, if that.  The bonus room and master bath already have roller shades which are fine (may need something else for light blocking once the bonus room becomes a theater).  That just leaves the bedrooms, office and powder room.

The powder room has a big window right next to the toilet that looks onto the front porch.  Love that it has a window (unlike the other 3 full baths), but not it’s location.  I’ve been trying to figure out what to use that won’t block out the light during the day, but won’t allow people to see in at night.  I have found a white roller shade fabric that lets a lot of light thru but isn’t see-thru, so I think that may be the solution.

We have a similar problem in the office regarding privacy.  That room has windows on 2 sides that face southwest.  So, it’s going to get sun most of the day which will keep it warm in there.  Our old office was the same way so we kept the shade shut most of the day which left it dark in there.  I would like the light to come in during the day, but not allow people to see in at night when the lights are on.  I am now leaning towards horizontal sheer shades for that room.  They are similar to faux wood blinds, but are made of fabric and they roll up out of the way like roller shades. You can adjust the fabric slats to control the light and privacy and they come in light filtering or room darkening fabrics.  I’m a bit concerned about how dirty they may get (definitely not going to get all white), but the ability to roll them up should keep them cleaner.  They will probably stick out into the room some because of the window sill, but I think it will be ok.

For the bedrooms, I’m probably just going to get blackout roller shades.  I’ve had a hard time finding ones that aren’t ugly vinyl though.  I have a few more samples coming and a couple I already have that may work.  The master bedroom also has a french door onto the back porch which is an issue.  It shouldn’t get much sun, but I don’t want a bunch of light coming in there.  I considered replacing it with a door with blinds between the glass or adding on built-in blinds (which we did in our first house).  They don’t look very nice or block much light though.  I’m now leaning towards just hanging a roller shade there to match the window.  It will be up most of the time and shouldn’t be too noticeable.

I was going to put a blackout roller shade in the front bedroom as well, but since it’s going to be a multipurpose room, that might not be the best idea.  It faces west so it’s going to get direct sun most of the day.  It will also be the secondary guest bedroom so it needs something to block out the light.  I need to figure out something that will allow light in, but block the heat if we are in there during the day and block the light enough if someone is sleeping in there.  It’s not a room that will be slept in very often, so complete light blackout probably isn’t necessary.  I’m thinking something like the sheer shades in the office but with a room darkening fabric.

I’d also like to get something for the garage which has 4 windows.  Again, something that allows light in but not the view.  I put super cheap light filtering vinyl roller shades in our old garage since they wouldn’t collect dust.  I’m leaning towards solar shades this time since they still allow you to see out, but not in (except at night when the lights are on, which isn’t often in a garage).  They could also be hosed off if they get dirty.  I’ll probably try to order something in the next couple weeks.  I have most of the measurements now, but am hesitant to order anything until we’ve been in there for a couple days.

Meanwhile, The-Hall-Way.com is set to reach 15,000 visitors this week.  That’s crazy.  When I started this blog, I thought it might be cool if I eventually ended up with a 1000-2000.  I have to credit Pinterest and the link from Ana-White.com for bringing most of you here along with random web searches for various items I’ve wrote about (countertops, flooring, siding, etc).  As I said before, this isn’t turning out to be the story I started to write, but I hope to keep posting about our adventures with our new house instead.  My list of ideas and DIY projects is long and I think there will be plenty to share!  I am excited to see it all come together and hope you will continue to stop by 🙂